Appendix I Flora and Fauna and Examples of SuDS

The Knebworth Neighbourhood Plan area is rich in flora. Within the past few years over 500 different species of wildflowers, trees, grasses and ferns have been recorded, as well as numerous types of lichen, liverworts and mosses. These can be found in the woodlands, fields, hedgerows, verges and copses throughout the Plan Area.

Many of the flowers found in Knebworth are considered "vulnerable" or "near threatened" in England, including field scabious, wild strawberry, harebell, quaking grass, heath speedwell, and ragged robin (Herts Flora Group, n.d.). Many trees and shrubs are also found in the parish and include mature oaks, horse chestnuts, ash and field maple.

Knebworth Park contains important and nationally declining habitats notably the characteristics of acidic and heathy conditions (MHCLG, 2019). Knebworth Woods is the only Hertfordshire site where the scarce greater broomrape is found. In 2014 the heath dog-violet was found in flower at a heathy corner of the Knebworth Park by Wintergreen Wood (Herts Flora Group, n.d.). English bluebells (Hyacinthoides non-scripta) also carpet these woods in spring. Their flowers provide an early source of nectar for bees, hoverflies, butterflies and other insects (Woodland Trust, n.d.). True bluebells are coming under threat due to habitat destruction, collection from the wild and crossbreeding (hybridisation) with non-native bluebells.

Where road verges are either not mown or partially mown (such as in Old Lane, adjacent to KB4), this encourages a wide variety of wildflowers including field poppies, teasels and field scabious (Knautia arvensis – on the vulnerable list (Herts Flora Group, n.d.)). These verges provide habitats for smaller creatures, bees and other insects as well as supplying food (nectar, pollen, seeds) throughout the year. It also provides nesting material and sites for hibernation or overwintering. In addition, the unmown verges help wildlife to move around their territory. 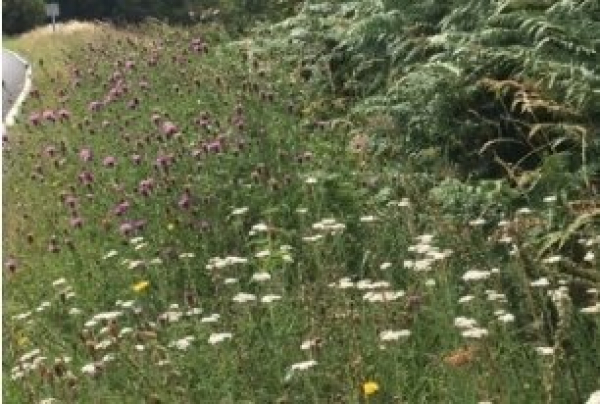 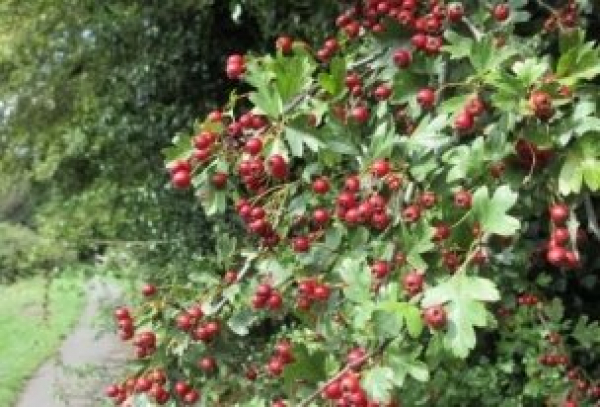 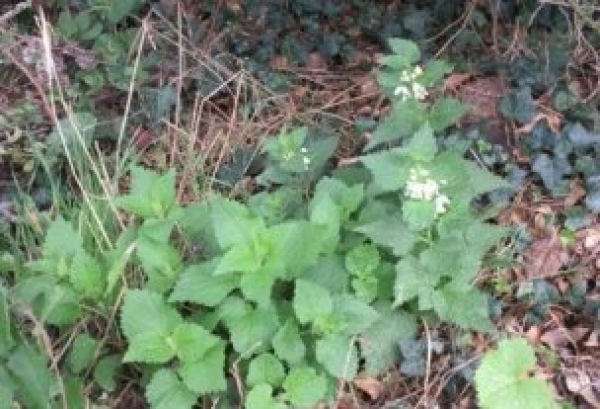 Rich hedgerows can be in food for wildlife in just a short stretch of hedgerow. The photographs above show hawthorn (Crataegus monogyna), blackberries (Rubus fruticosus), White dead nettle (Lamium album), immature ivy flowers (Woodland Trusts, n.d.). The hawthorn and blackberry both flower in spring with seeds in late summer to autumn, while the dead nettle flowers from March to December. Ivy provides flowers from September to November followed by seeds from November to January.

Many species, such as badgers and hedgehogs, have their own network of tracks. Hedgehogs can often range 2-3km a night and have home territories of 1-20 hectares (Hedgehog Street, n.d.). Badgers may have averages home ranges of 50 hectares (Badgerland, n.d.), although this can range from 30 – 300 hectares depending on the quality of the habitat. 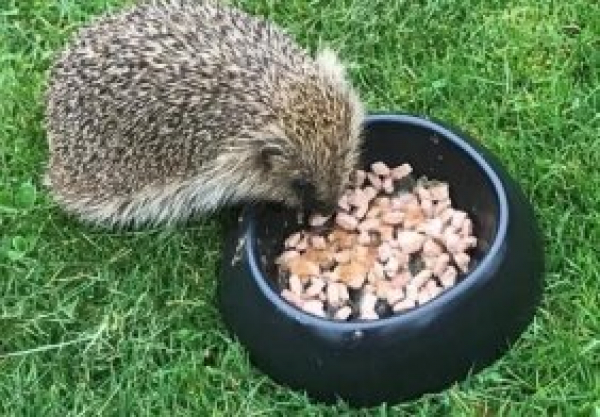 Within Knebworth parish, a survey was carried out over a one-month period (10th June - 9th July 2019) in a residential plot of 0.45 hectares, in the village's principle residential area (and close to KB1). It used 4 strategically placed cameras and was supported by additional personal observations (Nation, 2019). The survey provides a snapshot of the type of wildlife found in Knebworth which includes mammals (such as badgers, foxes, hedgehogs and the more unusual polecat), amphibians (frogs, toads), grass snakes and a wide variety of birds including nuthatches, robins, wrens, hawks and owls. It should be noted that polecats are of conservation significance as they are now making a comeback from 'extinction' and are spreading into East Anglia (Vinent Wildlife Trust, n.d.).

In a separate garden (in Old Knebworth, approx. 0.1 hectares) various insects have been recorded (or seen) over the past few years. These include: Six-spot Burnet moth (Zygaena filipendulae), Rhopalid Bug (Corizus hyoscyami), shield bugs, stag beetle larva, bumble bees, honeybees, hummingbird hawk moth. These observations clearly demonstrate a wide variety of fauna is present in the parish which should be carefully protected.

Celandine flower amidst leaf litter and the leaves of Lords and Ladies, provide a later source of food 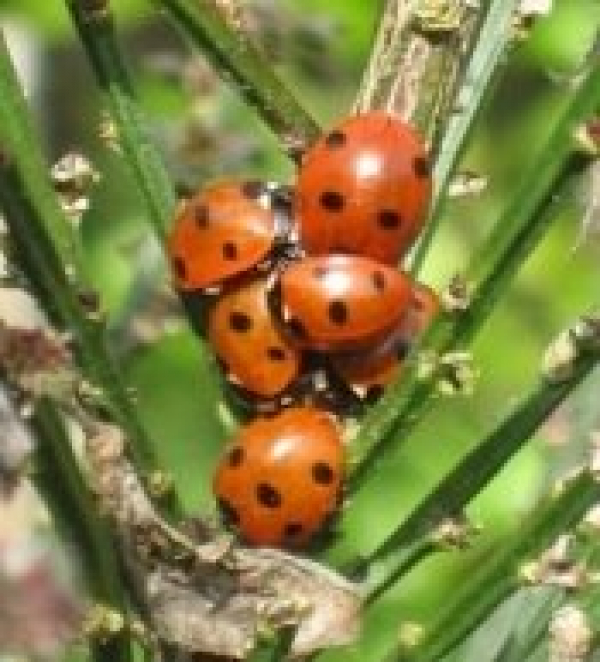 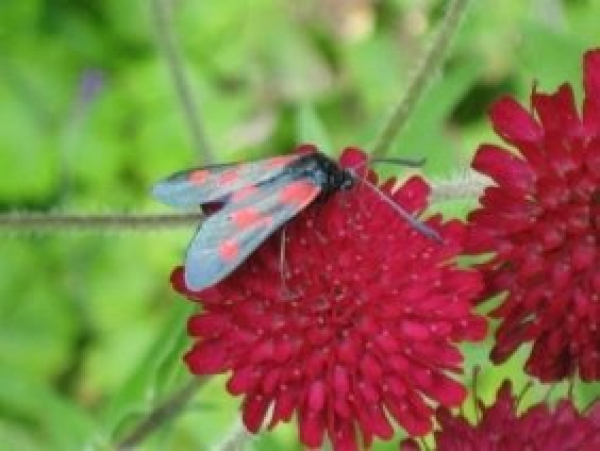 The churchyard of St Martin's provides a safe haven for species that are not found in the wider countryside. The example of Manchester's Southern Cemetery (BBC, 2010) demonstrates this. St Martin's churchyard also contains conifers which provide a source of seeds. 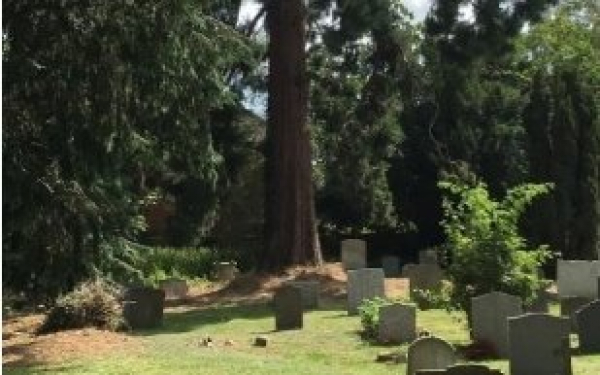 Examples of SuDS and Water Conservation

The photograph below shows an example of how small areas of flowers (left) both look attractive and also provide food and shelter for wildlife. The green roof (right) also helps insulate the building below. 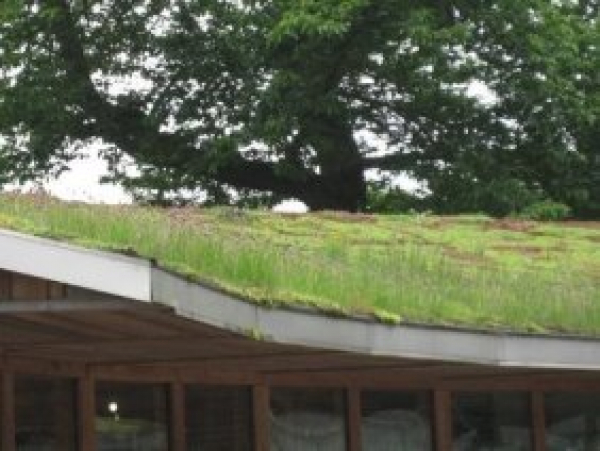 Flowers in Deards End Land and example of green roof, both providing food for wildlife

Surplus or waste material from construction can be used to create SuDS features or wildlife habitats. These can both look attractive and also reduce the total amount of waste going to landfill. The photographs below show old shipping container reused as an information centre. It has a green roof and water is filtered into the adjacent rain garden. In the centre, a bug hotel has been created from a many different materials, each creating a multitude of habitats. On the right a border has been created using left over tiles. 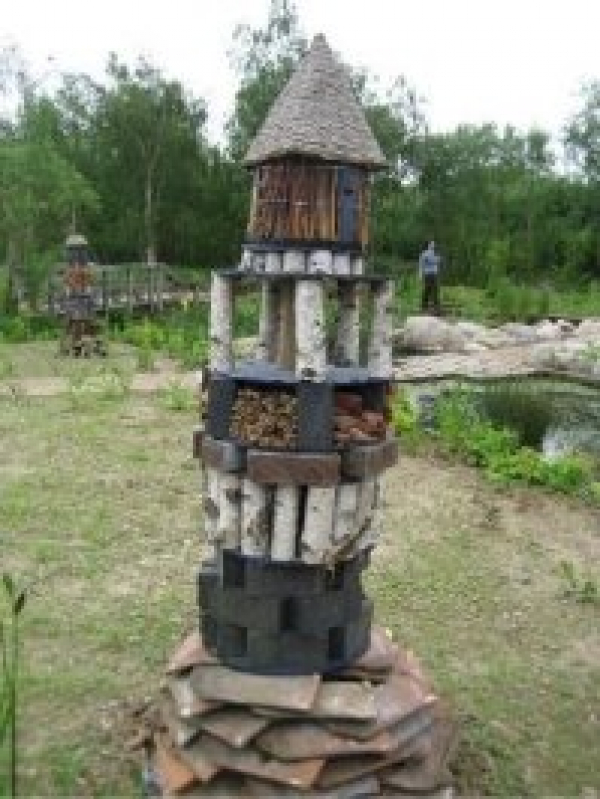 An example of a significant retrofitted SuDS solution is Lamb Drove in Cambourne, Cambridgeshire (Interpave, 2019). It has been effective and popular with residents. In the retrofitting, the natural water flows were optimised and integrated with the landscape design. This added both amenity interest and biodiversity. It also demonstrated lower construction and whole-life costs.

Water may be conserved in many ways. Rainwater can be harvested and stored for use in the garden, by water butts or underground tanks. Using decorative mulches will also help prevent evaporation by up to 75% as well as providing nooks and crannies for small creatures. Ensuring the soil has a good, aerated structure by incorporating organic matter will allow water to drain more easily, while at the same time allowing plants to find the water and nutrients they need. Generally, most plants, including lawns, should not need to be watered once they are established. The success of this approach can be seen in Beth Chatto's dry garden in Essex.