1.1 Purpose of a Neighbourhood Plan

A Neighbourhood Plan (sometimes called a Neighbourhood Development Plan) is a way of helping local communities to influence the planning of the area in which they live and work. It can be used to develop a shared vision for their neighbourhood, identify and protect important local green spaces and influence what new buildings should look like. It also offers the opportunity to develop a multi-modal approach towards sustainable transport.

At the Parish Council meeting on 13th April 2016 the KPC discussed (Minute 8.1) the proposed North Hertfordshire District Council Local Plan (NHDCLP) and agreed that it should try to influence development in the parish through a neighbourhood plan. The Council approved the terms of reference of the Steering Committee for the Neighbourhood Plan. 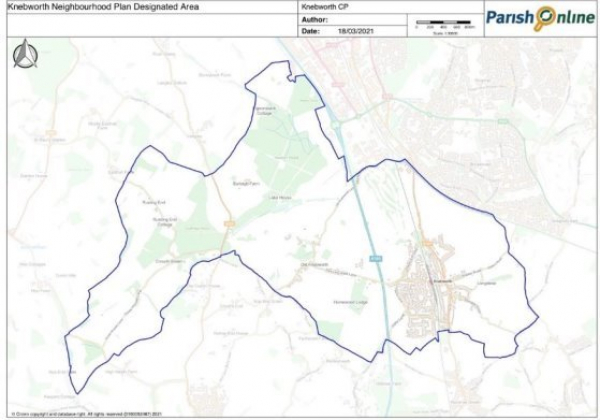 There are several key pieces of legislation relating to planning and development including the Town and Country Planning Act 1990. The Localism Act 2011 is also relevant, as it provides a statutory regime for neighbourhood planning, and allows qualifying bodies, (such as parish councils), to influence more directly the way in which their locality is developed.

Through their Neighbourhood Plan, local people can set policies for their area on issues relating to new development and, once the Plan has been through the legal process and formally made, it becomes part of the strategic Local Plan for the area - and must be used by local planning authorities when making decisions on development proposals.

The Government's 2019 National Planning Policy Framework (NPPF) (NPPF, Feb 2019) sets out its planning policies for England, and how these are expected to be applied. It is based on the fundamental principle that the purpose of planning is to help achieve sustainable development, i.e. growth which ensures that better lives for us does not mean worse lives for future generations; and which reflects the fact that our natural environment is essential to our wellbeing.

In launching the NPPF, The Rt. Hon. Greg Clark MP (then Minister for Planning) said "Planning must be a creative exercise in finding ways to enhance and improve the places in which we live our lives".

The NPPF's key concept is the involvement of local people and their accountable councils, through producing their own distinctive local and neighbourhood plans, reflecting the needs and priorities of their communities. Consequently, in developing the Knebworth Parish Neighbourhood Plan we have taken the NPPF principles into account and considered not only the current needs of our parishioners, but also likely future needs – particularly given the information and preferred options for development contained in the Consultation Paper published by our accountable council in December 2014: "North Hertfordshire District Council Local Plan 2011 – 2031."

When considering positively the housing needs of our community, and the potential options for future development within Knebworth Parish, we have borne in mind the three mutually dependent dimensions of sustainable development, which require the planning system to perform a number of roles. These are:

Alongside these, we have considered Knebworth Parish's particular characteristics such as location, historic environment, population, amenities, parking facilities, infrastructure etc; and the views of its parishioners on the key issues impacting on life in our community and future development within it.

In doing so we believe we have produced a balanced summary of those issues - and positive proposals to address them, as set out later in this Plan. By working in partnership with stakeholders we aim to achieve creative improvements to, and better future development of, our parish while protecting and enhancing its character and environment.

In the proposed NHDCLP, the sites for the Local Housing Allocations will be taken out of the Green Belt. The owners of the land within these identified areas made their land available for development through the District Council's Call for Sites Process.

Knebworth Parish Council (KPC) do not own any of this land. The only way that KPC can influence the nature of any proposed development, is through discussion with landowners/developers, and through the planning process, which will be revised and refined by the proposed NHDCLP, and additionally, through the Neighbourhood Plan, which can refine the NHDCLP further, in response to the wishes of the local community.

If the proposed NHDCLP is adopted before this Knebworth Neighbourhood Plan (KNP) Examination is concluded, then this KNP may be revised to accommodate changes in the adopted NHDCLP. Until that time, however, the KNP will include relevant and applicable details from the proposed NHDCLP, (on the presumption that the proposed NHDCLP will be adopted with its current form and content), so that those proposed policies can be acted on.

This KNP exists to provide detailed policies regarding all potential development within the Knebworth Parish Area, including the areas defined in the proposed NHDCLP.

1.4 Process of preparing the Neighbourhood Plan

The preparation of the plan can be broken down into 4 broad stages:

Throughout the process there has been continuous engagement with the local community as set out in the Consultation Statement. An overview of the consultations is set out below.

1.6 The Neighbourhood Plan Evidence Base

The evidence for this plan has been gathered from feedback obtained from the local community as detailed above. It has also been taken from various British Standards, advisory documents and Statutory Documents all of which are referenced where appropriate in the plan. Additional evidence has been borrowed from the NHDCLP evidence base and from the 2011 census.

This KNP includes a number of references to a report from the worldwide design, planning and construction company, AECOM.

As part of the KNP development process, KPC asked for support from the government agency, Locality, and were awarded a technical assistance package to be provided by AECOM for Design and Masterplanning advice and guidance. This work has been of great value to the KNP team.

The report contains a large amount of guidance, best practice, and future insight, including a chapter on design guidance, the first part of which (AECOM report Section 3.1 – Placemaking and Design Principles) provides a Design Code for the Neighbourhood Plan and is included as Appendix K . Other parts of the AECOM report are individually quoted or referenced in this document.

In order to illustrate the concepts described, AECOM created nominal site layouts and access indications. These do not define or describe the ultimate layouts or access proposals, which will be submitted by the developers concerned, and will be subject to all of the usual planning processes and consultations.