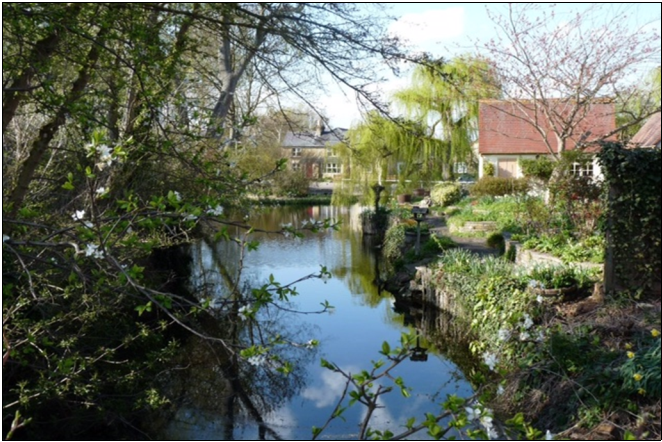 1.1.1 The National Planning Policy Framework (2012) (NPPF) Para. 183 states that "neighbourhood planning gives communities direct power to develop a shared vision for their neighbourhood and deliver the sustainable development they need."

The purpose of the Pirton Neighbourhood Development Plan is:

1.1.3 To encourage sustainable development in accordance with the character of the village and Parish of Pirton, which accords with the needs and wishes of the local community and which is in general conformity with the Strategic Policies of North Herts. District Council (NHDC).

1.1.4 To provide a legally binding "practical framework within which decisions on planning applications can be made with a high degree of predictability and efficiency" in accordance with the NPPF Core Principles (Para.17). 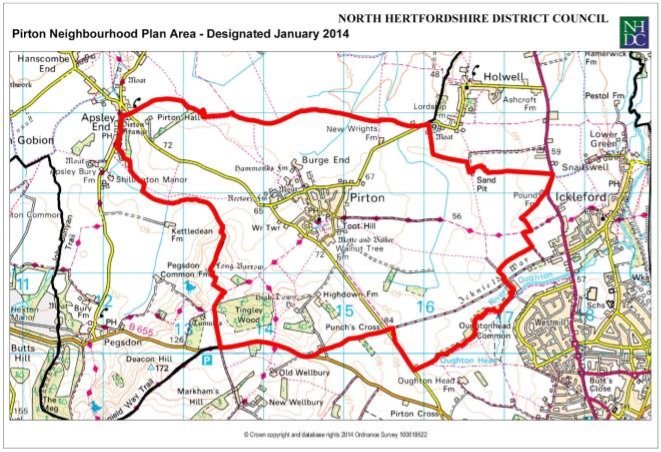 1.2.1 The whole of the Parish of Pirton was designated by North Herts District Council in January 2014 as per the map above.

1.3.1 The Pirton Neighbourhood Development Plan (the Plan) is a community-led document that guides the future growth, development and conservation of the Parish of Pirton, with a particular focus on the village of Pirton. Crucially, it contains planning policies that deal with a range of social, environmental and economic issues such as housing, heritage, biodiversity and transport.

1.3.2 The Plan describes Pirton and Pirton Parish and outlines the main elements that add up to define the character of the Village and Parish. The Character Assessment in Evidence Base 1 explains these in detail.

1.3.3 The Plan sets out a vision for the Parish until 2031, from which planning policies have been developed to meet the village and Parish need for houses and jobs and to protect and enhance what makes Pirton such a valued place to live.

1.3.4 The Plan has been produced by the Qualifying Body, Pirton Parish Council (PPC). In July 2013 the PPC established the Pirton Neighbourhood Plan Steering Group (PNPSG) which has included Parish Council members and community volunteers. More detail is given on page 1.

1.3.5 The Plan builds on the previous good work of the PPC including the 2003 Village Design Statement (Evidence Base 2) the 2013 Pirton Parish Plan (Evidence Base 3) and the 2010 Pirton Housing Needs Survey (Evidence Base 4).

1.3.6 The Plan covers the administrative area of Pirton Parish, being the designated area shown on the map on page 4. It is recognised that the vast majority of housing and other development will take place within the development boundary of the village of Pirton, see map on page 3. The village itself has a strong sense of place within a diverse rural parish. The Parish of Pirton embraces a stretch of the Chilterns Area of Outstanding Natural Beauty (AONB) to the south and west of the village and the contrasting Pirton Lowlands to the north and east. A network of long-established footpaths and bridleways such as the Driftway and Hambridge Way link Pirton with the wider Parish and beyond. 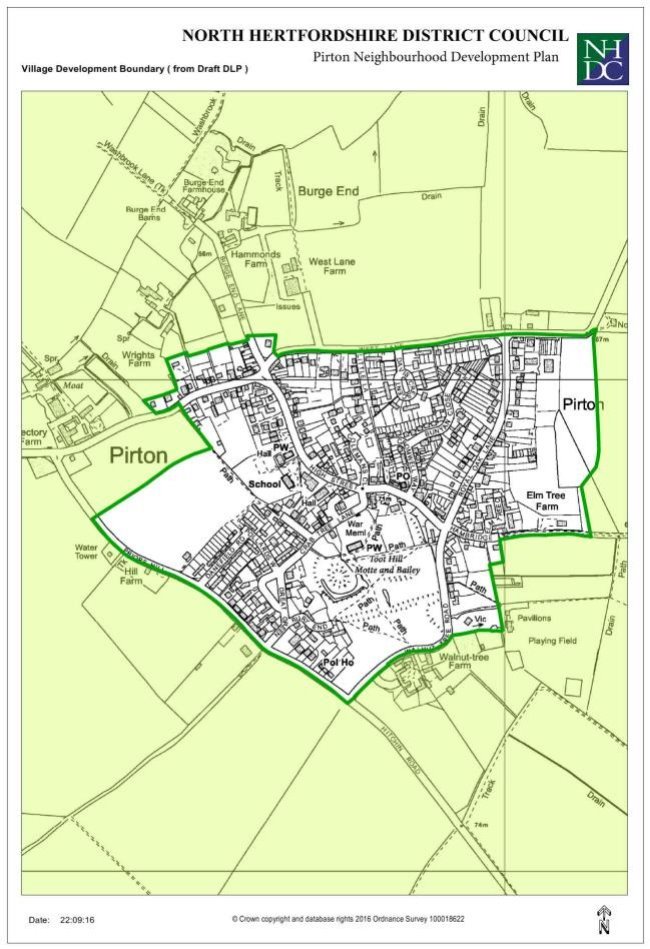 1.3.7 Pirton Village as per the map below based on the criteria used by the NHDC in the emerging NHDC Local Plan. The proposed development boundary encompasses the 2 sites (PT1 and PT2) originally identified by NHDC as suitable for housing development. PT1 has recently been declared a Scheduled Monument by Historic England. PT2 now forms part of a larger site and has been granted outline planning permission for up to 82 houses by NHDC. 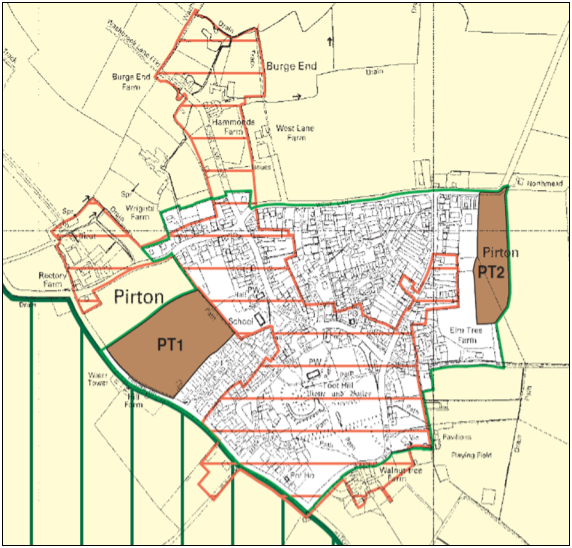 1.3.8 The Plan reflects community-wide aspirations, observations and concerns about Pirton's future. It is a realistic Plan, supporting a level of growth and development that is sustainable for Pirton Village and Parish, and which will benefit Pirton, the people of Pirton, and the wider community of North Hertfordshire.

1.3.9 In December 2014 the community was asked to complete a questionnaire which guided the resulting development of the Plan. 80% of households took part in the adult part of the Questionnaire. The individual adult response rate was 76% with respondents aged from 16-96 years. The resultant Questionnaire analysis (The NP Survey 2015) showed that 93% of the respondents were satisfied with living in Pirton and like the village as it is.

1.3.11 The Plan meets the Basic Conditions set out within legislation (as listed below) and takes appropriate account of national planning policy and advice and the strategic policies of North Herts. District Council.

1.3.12 In April 2016 A Strategic Environmental Assessment Screening Determination report was commissioned by NHDC (see Evidence Base 28) which concluded that "Pirton Neighbourhood Development Plan is not likely to have significant effects on the environment and therefore a SEA is not required".

The principal reasons for this conclusion were: 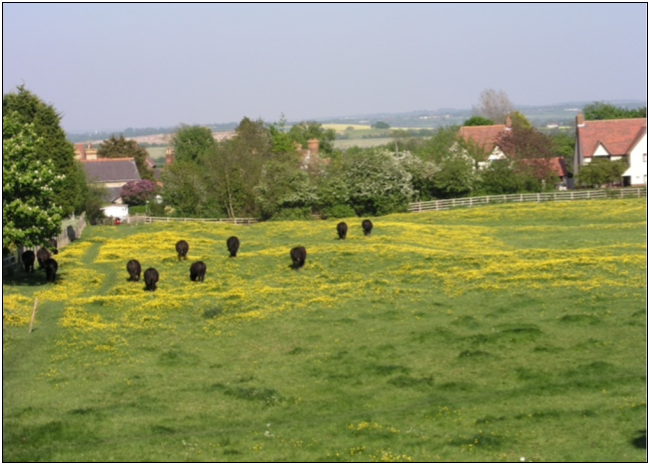 The Bury in Spring

1.4 The Strategic Context for the Plan

1.4.1 The government has an ambitious plan for building homes across England. There is particular pressure on the south-east of England with London continuing to act as an economic magnet. North Hertfordshire as a whole has been assessed as needing to build over 16,500 homes by 2031, to meet not only local need, but need arising from "the London factor" and the expansion of both Luton and Stevenage outside of their tightly-drawn boundaries. Pirton, which is not in protected green belt countryside, must help to take some of this development.

1.4.2 As well as the Localism Act 2011 and the Government's policy to deliver significant housing development, the Government has set out national planning policies, which must be followed, called the National Planning Policy Framework (NPPF). The policies in our Plan must also be in general conformity with the strategic policies set out in the NHDC Local Plan. Until superseded these are the saved policies from the 1996 NHDC Local Plan which do not conflict with the NPPF.  Additionally, the Plan's Policies should be in general conformity with the emerging NHDC Local Plan 2011-2031 once finalised and adopted.

1.4.3 According to the new draft Local Plan and the 2013 NHDC Strategic Housing Land Allocation Assessment (SHLAA), housing growth in the North Herts District will be predominantly in urban areas. Nonetheless, a significant figure for growth is expected to come from most rural villages and parishes.  The approach of the NHDC has been to consider housing need on a district-wide basis, not on a village by village, town by town basis, and then to ask landowners to put forward land for development sufficient across the North Herts District to meet the identified need. The identification of land available for development in Pirton has led directly to the number of new houses identified for Pirton within the lifetime of the emerging Local Plan, as well as to the proposed development boundary for Pirton Village.

1.4.4 The NHDC has identified Pirton as a "Category A" village and a suitable village for growth to sustain and enhance its viability and attractiveness, and to continue to provide services and amenities to nearby smaller settlements.

1.4.5 Pirton's strategy for growth is to adopt a development boundary for Pirton based on the criteria used by the NHDC.  Land within the proposed Development Boundary is where housing development will take place - subject to the planning policies within this Neighbourhood Plan and the NHDC Local Plan.

1.4.6 Pirton accepts the level of growth in the emerging NHDC Local Plan. The NHDC has confirmed that our Plan meets not only Pirton's housing needs during the lifetime of this Neighbourhood Plan, but also its generous share of the housing needs of the North Herts Community.  This means, in effect, that there is no requirement for this Plan to identify and allocate more parcels of land for development. Since 2011 planning permissions for up to 87 houses have been granted, and 11 affordable houses built. This will increase the housing stock of Pirton Village by about 19%, with land available within the development boundary for further ad-hoc infill development.

1.4.7 Managed by the policies in this Plan such growth is considered sustainable for Pirton, given its modest population size, infrastructure needs, limited public transport and rural road network.

Economic: development that contributes to building a strong, responsive and competitive economy;

Social: development that supports a strong, vibrant and healthy community;

Environmental: contributing to protecting and enhancing our natural, built and historic environment and heritage.

1.4.9 To achieve sustainable development a thoughtful and sensitive approach is required; one that meets the Pirton housing need and contributes proportionately to the overall North Hertfordshire need, but in doing so does not needlessly damage the environment or undermine the social fabric and well-being of the village.

1.4.10 Current residents accept that more housing is needed to maintain a strong, vibrant, healthy community but also feel strongly that the very qualities which make Pirton such a lovely place to live must be protected. Therefore, this Plan positively seeks sustainable development that supports these aims while reflecting community-wide aspirations, observations and concerns. These are mandated by the consultation in December 2014 to which 80% of all households within the Parish responded. From these households 76% of all adults aged 16+ believed a Neighbourhood Plan which planned for growth was important.

1.4.11 The policies in our Plan are in general conformity with the NHDC Strategic Policies in the currently saved NHDC Local Plan 1996 and are consistent with the NPPF.