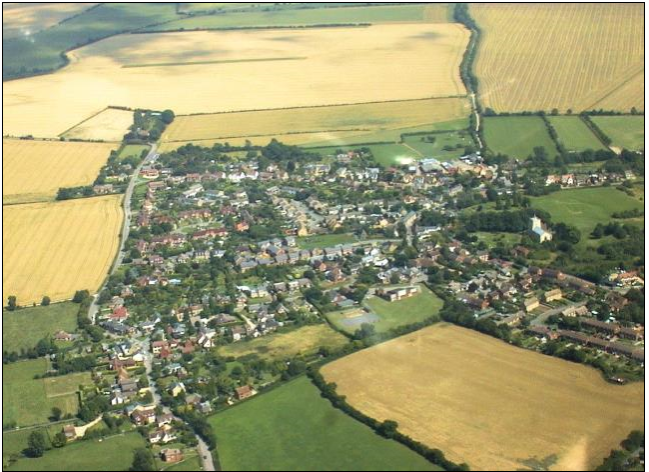 2.1.1 The village of Pirton is first recorded in the Domesday Book of AD 1086 as Peritone, meaning 'pear tree farm'. It has a long and rich history which is detailed in the Character Assessment at Evidence Base 1.

Today Pirton is a village of approximately 1300 people with more than 526 homes (2011 Census reports 984 adults age 16+ and 513 houses). The village is situated on the slopes of the Chiltern Hills and on the edge of the Area of Outstanding Natural Beauty (AONB) within Pirton Parish, and located in North Hertfordshire on the border with Bedfordshire. Much of the village is designated as a conservation area. See map on page 9. 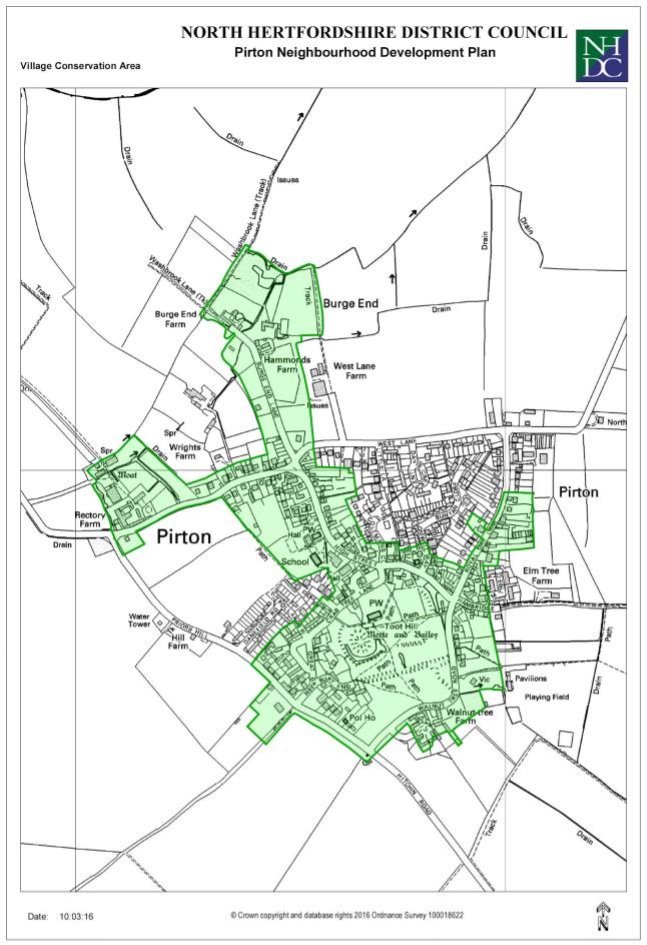 2.1.3 Pirton is therefore a desirable place to live, not only due to its accessibility to London, major roads, rail links and airports, but also due to its tranquil rural setting in the countryside. The countryside merges seamlessly into the village and vice versa, and plays an important part in shaping the character of the village.

2.1.4 The B655 between Hitchin and Barton-le-Clay is the nearest main road and the nearest junction is approximately 2 miles away, reached along a fairly straight but undulating road with a number of blind summits. The A600 Bedford/Hitchin Road, also approximately 2 miles away, is accessed through Holwell Village via a narrow road with a series of narrow, sharp, blind bends. Within the village itself, the roads are narrow and serpentine in character.

2.1.6 The surviving historic original houses are typically thatched, with exposed timber frames, or clay tiled with handmade 2″ brick or rendered walls. During the Victorian period, development was typified by the use of Arlesey white brickwork with soft red brick feature banding and arched lintels. A common feature of this period was the terrace of cottages with several examples being seen in the High Street, Holwell Road and West Lane.

2.1.7 The grouping of houses into "estates" is another feature of the village. This commenced during the 1920s and 1930s and included two council house estates of semi-detached and terraced houses. This continued in the 1960s and 1970s with a large estate of modest housing (Bunyan Close) culminating in recent years with small modern estates such as Docklands, St. Mary's Close and, most recently, Coleman's Close.

2.1.8 Since then, the development of individual houses, or small groups of houses, has taken place continuously on infill sites throughout the village. These generally respect the village scale and character with common materials being red facing brick or rendering. The extension of existing buildings is another common feature of the village. The best of these respect the scale and design of the original house, using similar or compatible materials.

2.1.9 A network of local footpaths and bridleways such as Wood Lane, Hambridge Way and the nationally important Icknield Way Path which pass through pen countryside, link Pirton to surrounding villages and the town of Hitchin. These afford a unique view of the village as a green, wooded area concealing many of the houses and other buildings. Aerial views of the village clearly show its isolation and its green and wooded spaces.

2.1.10 Amenities include the Village Hall, two pubs, an Anglican Church and Methodist Chapel, a primary school and a pre-school nursery, the village store and post office. There are village charities and clubs including JoyCare, a village charity to assist the elderly. There is a Recreation Ground providing four football pitches, a cricket pitch all administered by the Sports and Social Club and a multi-use games area (MUGA) administered by the Parish Council. This diversity of interests and community spirit contributes greatly to the vitality of the village.

2.1.12 There are the six Visual Character Areas, see map below and the description in the Character Assessment, which can be found in the Evidence Base 1.

2.1.13 In addition, there are other well-established open spaces including Great Green, Blacksmith's Pond and the Recreation Ground.  Middle Green in Coleman's Close is the most recent housing development where significant open space has been incorporated in keeping with village character. The Recreation Ground and Middle Green in Coleman's Close provide the play space needs of the village. Pirton Primary School also has substantial playing fields for pupil use. A full list of these can be found in PNP 6. 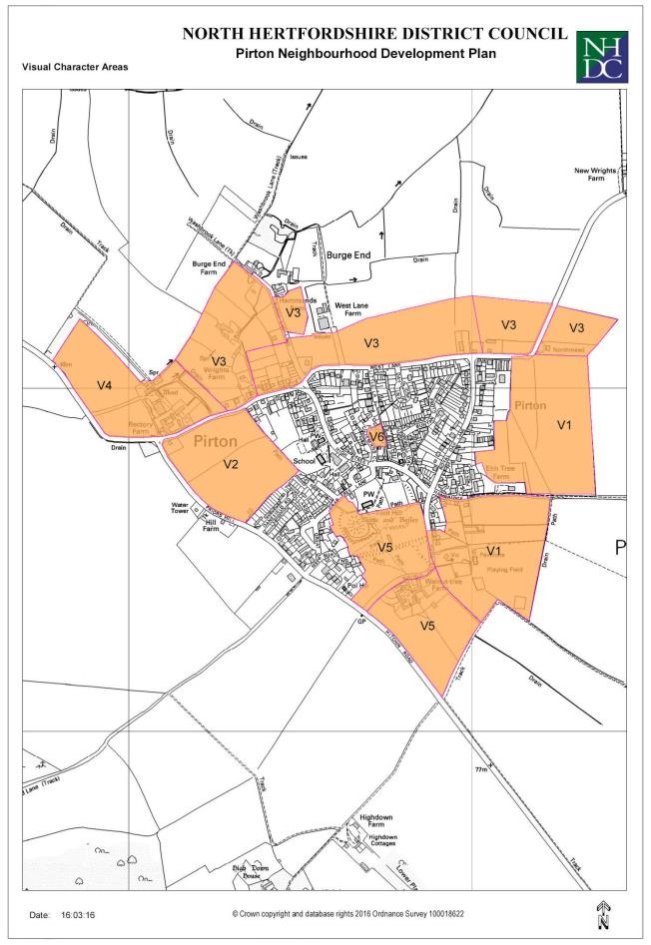 2.1.15 Pirton Village and the Parish of Pirton include the chalk grasslands of the Chilterns AONB, the rich agricultural land of the Pirton Lowland area, well-wooded areas such as the ancient Tingley Wood, with trees over 600 years old and a wide variety of hedgerows, trees and shrubs bordering roads and footpaths and in gardens. This gives Pirton a rich biodiversity. Pirton is home to 5 protected species; 33 species of butterfly and 158 of moth; 66 species of birds, as well as a range of amphibians. More detail about Pirton and its biodiversity can be found in the Pirton Character Assessment at Evidence Base 1.

2.1.16 People living in Pirton much appreciate the special qualities of the village and surrounding landscape and want those occupying new development to have the same benefit. The results from The NP Survey 2015 showed that 93% of those completing it were satisfied with life in Pirton. Likewise, The NP Youth Survey 2015 showed that 92% of 10 to 15 year olds were satisfied with living in Pirton. This demonstrates considerable regard and affection for their village and its environs by both adults and young people in Pirton.

2.1.17 The community understands the need to accommodate housing growth. However, there is considerable concern that new development in Pirton could erode the very qualities that make the village special if it is not carefully managed in scale and design. Therefore, growth over the next 15 – 20 years must be more than just an exercise in meeting housing supply 'numbers' through the addition of large, characterless estates on the fringes of the village. Such development is not suited to Pirton however suitable it may be for an urban environment. Great care and sensitivity in design is essential to avoid urbanisation.

2.1.18 The Plan encourages development that contributes to meeting the need for housing in North Hertfordshire and Pirton in particular. Development must be sustainable for Pirton.  To achieve this, development must enable the provision of a choice of new homes to meet the needs of all sections of the community, must respect and enhance the character of the village and surrounding landscape and must be at a rate that is not detrimental to the character and the existing strong, vibrant and healthy community. 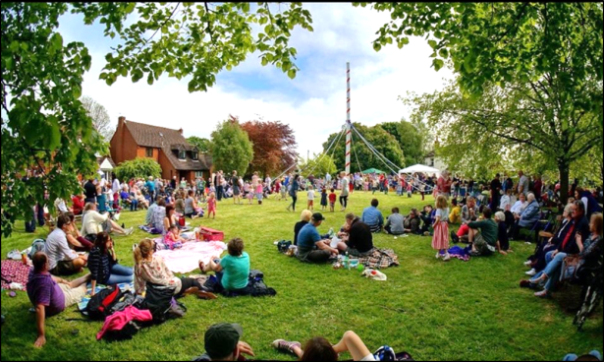 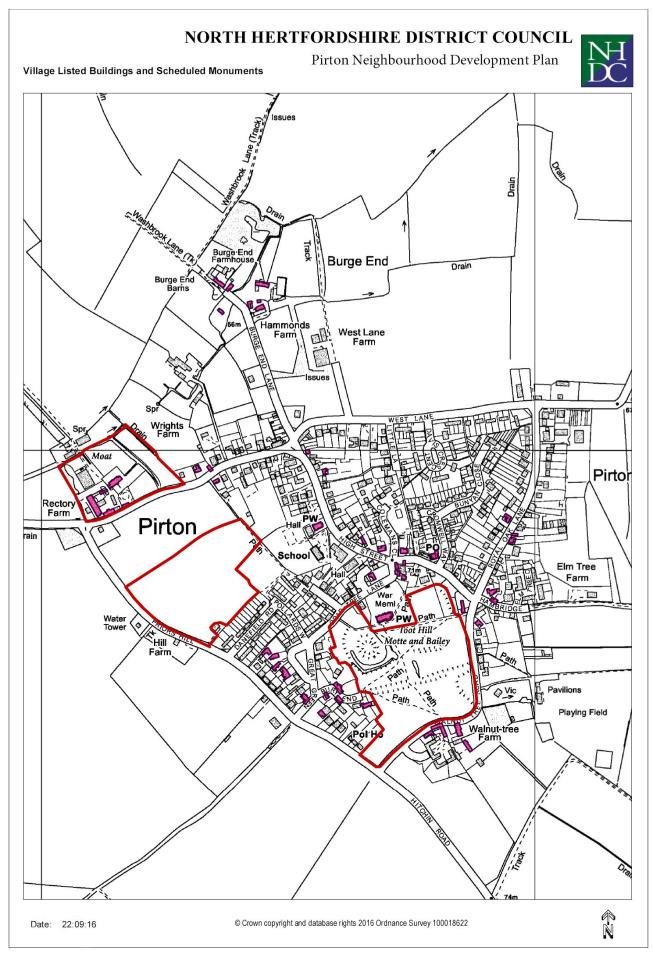 The full Questionnaire results can be found in the NP Survey 2015 Evidence Base 5.