1.1 The Preston Parish Neighbourhood Plan is a community-led document for guiding the future development of the parish. It forms part of the Government’s current approach to planning.

1.2 The Plan has been developed under the Localism Act (2011) and the Neighbourhood Planning (General) Regulation (2012), which was introduced to regulate the formation and approval of neighbourhood plans.

1.3 The Plan has been developed in general conformity with the National Planning Policy Framework 2012 (NPPF), which sets out the Government’s planning policies for England and how these should be applied. Our plan has also been developed in accordance with the saved policies of the 1996 North Hertfordshire District Council (NHDC) Local Plan which do not conflict with the NPPF. In addition, our plan’s policies conform to the emerging NHDC Local Plan which is expected to be finalised and adopted in 2018.

1.4 Neighbourhoodplanningnow provides an opportunity for the community to have a real say over local decision making, to achieve its long-standing goals through the planning system and address the challenges and opportunities facing the future vitality of the parish. The Neighbourhood Plan is based on extensive research and influenced by robust engagement with the local community. When the Plan is made it will have very significant weight in the determination of planning applications.

1.5 The Neighbourhood Plan was commissioned byPrestonParish Councilfollowing a Parish Meeting on 26 June 2016and part funded by them. Other funding came froma Locality Grant from central Government and a grant from NHDC. ASteeringGroup of local residents developed the Plan based on the principles of sustainable development.

1.6 Sustainable development is about positive growth;making economic, social and environmental progress for present and future generations.The Steering Group has taken due regard of these three dimensions which constitute what is sustainable in planning terms, according to the National Planning Policy Framework.

1.7 The policies and projects in the Plan reflect the views of local people gathered through a series of consultation events, questionnaires, detailed stakeholder sessions and examination of relevant documents. The Plan references the qualitative and quantitative outputs from these activities, particularly in relation to the provision of evidence in support of the policies and projects.The SteeringGroup is grateful to all residents and organisations who have contributed to the evidence, objectives and policies for the Plan.
1.8 Some of the points raised by local people are not within the remit of either the Neighbourhood Plan or the Parish Council: Aircraft noise and pollution and lights from Luton Airport. Other points and ideas raised during the Regulation 14 Consultation have been incorporated into a Project List which is contained in Appendix G on page 97. 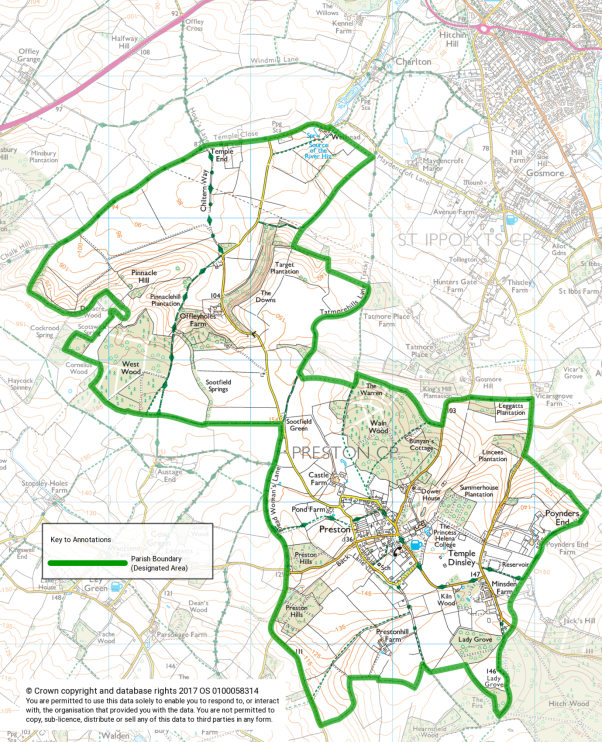