Baldock is a compact, historic and attractive market town set within the rolling chalk landscape of north Hertfordshire. The town and its surroundings are rich in archaeological remains, reflecting a long history of settlement from prehistoric times onwards, including the site of a Romano-British small town at Walls Field. The centre of Baldock retains the layout of the medieval town laid out in the 12th century, and contains a significant concentration of historic buildings, many of which are listed.

The town occupies a strategic location at the crossroads of the old Great North Road and the Icknield Way. Once an important coaching town, it has been bypassed twice: first by the A1(M) and more recently by the Baldock bypass opened in 2006. However, traffic congestion remains an issue in the centre of Baldock, with the Whitehorse Street/Station Road crossroads being a particular bottleneck.

One reason for this congestion is the importance of east-west movement through the town: Baldock sits at one end of a near-continuous urban corridor running through Letchworth to Hitchin, which generates a lot of trips between the towns for work, shopping and leisure. Baldock's employment base is relatively small compared to its population, so many residents commute to these and other centres (such as Stevenage, Cambridge and London).

At the same time, Baldock attracts visits for shopping and leisure, as it has excellent independent retailers, a growing range of cafes and restaurants and a large Tesco superstore. It also has a strong community spirit and hosts a number of events and festivals throughout the year, notably the Baldock Festival in May and the Balstock music festival in September. The opening of the Arts and Heritage Centre in 2013 gave the town an important new venue for performances and exhibitions.

Baldock also enjoys some good public services, with well-regarded schools, a frequent rail service, doctors' surgery and health centre, fire station and library. However, some of these facilities are at or approaching capacity, while Baldock relies on other towns for some services (in particular for various sports like hockey and rugby pitches and swimming pools).

Outside Baldock, most of the land in the Neighbourhood Area is in agricultural or woodland use, and is quite sparsely settled (with the majority of it being designated as Green Belt in the North Hertfordshire Local Plan). Two local nature reserves - Ivel Springs and the Weston Hills – are located next to Baldock and provide important recreation opportunities as well as conservation benefits.

The three villages in the Neighbourhood Area are small, but have distinctive characters.

Bygrave sits on high land to the north-east of Baldock, and has two distinct parts. Upper Bygrave was a medieval village, and today comprises a small collection of houses and farm buildings around the Grade II* listed church of St. Margaret of Antioch, and a separate cluster along the road to Ashwell. Lower Bygrave is detached from it, and made up of relatively large houses with extensive gardens built in the 1930s. These were intended to form part of a larger community which would practice self-sufficiency, but this wider plan was abandoned, leaving the two streets that exist today. There are no shops or other facilities serving Bygrave apart from the church and a very infrequent bus service.

The village of Clothall also occupies raised ground, to the south east of Baldock, and is situated on the course of the former Roman Road to Braughing. It has, like upper Bygrave, an important medieval church (St. Mary the Virgin, also listed II*), with a small amount of housing scattered mainly to the south of it. Its facilities are marginally better than Bygrave, as it has a newly-built village hall, and there are more bus services during the day, although not at times that would allow journeys to and from work.

Luffenhall is a small and relatively isolated village in the far south-east of Clothall parish, on the border with East Hertfordshire. It has a linear and very rural character, with houses and farms dispersed along a country lane, a number of which are listed due to their special historic interest. There are no public services within the village.

How Baldock, Bygrave and Clothall could change

The new North Hertfordshire Local Plan proposes that 3,298 homes are built in and around Baldock between 2011 and 2031, together with a new employment area to the north of Royston Road (Figure 2). This will not happen all at once, and indeed is likely to take much longer than estimated in the Local Plan. Major sites take time to build – often much longer than anticipated – and the intention of Hertfordshire County Council is to phase the developments on its land (which includes all of the sites at the edge of the town). Even so, the rate and scale of change is likely to be much greater than Baldock has experienced in the past. This will create challenges, but also opportunities.

The developments are much larger than those that would be required to meet Baldock's own needs, and will bring additional people to the town to live and for work. This should help to support local shops and an even wider range of community activities. At the same time, one of the key concerns of existing residents is the impact which this growth will have on the capacity of local services and infrastructure, particularly the road network.

A number of improvements would be required by the new North Hertfordshire Local Plan to address this, including additional schools, shops and health facilities to serve the development proposed to the north of Baldock (site BA1). It also proposes new link roads to the north and south-east of Baldock to help limit the impact of growth on traffic in the centre of the town.

The new Local Plan does not deal with all of the key facilities that will be needed (in particular specific provision for open space and recreation), while the impact on local roads will depend on the accuracy of assumptions that have been made about future travel patterns and highway improvements. These are two issues which the Neighbourhood Plan seeks to tackle, so that a full range of necessary facilities is available as Baldock grows, and conditions on local roads do not get any worse. 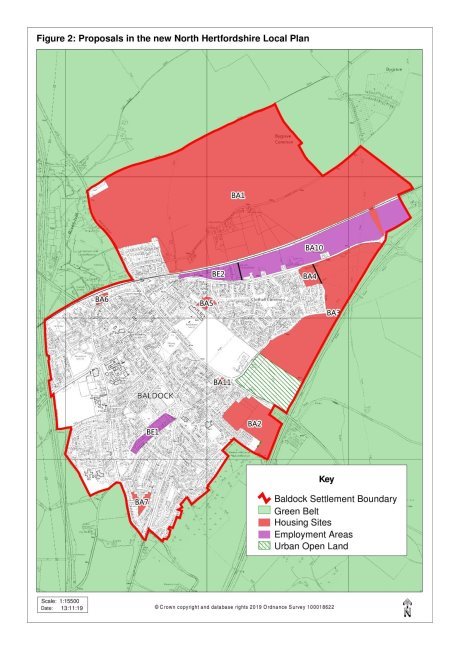 Note: BE1 and BE2 are existing employment areas; BA10 is proposed in the new Local Plan.

Large scale development to the north of Baldock could create a town of two halves, due to the physical barrier presented by the railway, and the fact that site BA1 would be provided with its own facilities (albeit more limited than those available in the town centre). Local people would like to see Baldock's strong sense of community continue, which will mean creating physical connections between old and new parts of the town, as well as efforts to promote community activities that can bring existing and new residents together.

The effect of Baldock's growth on the villages within the Neighbourhood Area will vary. Bygrave, Clothall and Luffenhall themselves will see very little new development, as the new North Hertfordshire Local Plan continues to restrict what can be built due to their small size and/or location within the Green Belt. However, the proposed expansion of Baldock will bring the edge of the town much closer to Lower Bygrave, and the populations of Bygrave and Clothall parishes will increase significantly (as most of the proposed sites on the edges of Baldock lie within them). This peripheral growth could also affect the physical connections that exist between Baldock, the villages and the wider countryside, through changes to rights of way and the local road network (especially in relation to Bygrave). Maintaining good accessibility with the surrounding communities and countryside is an important local concern that needs to be addressed.

One thing which can be expected to affect all parts of the Neighbourhood Area is the impact of climate change, which is likely to mean higher temperatures, water scarcity and more extreme weather events[2]. This makes it important that new buildings are constructed in ways that limit energy and water demands, and that steps are taken to manage the impacts of extreme weather such as surface water flooding (which some parts of Baldock are vulnerable to). Most aspects of construction are controlled through building regulations rather than the planning system, but there are ways in which planning can help to address these issues, and where both the new North Hertfordshire Local Plan and the Neighbourhood Plan have a role to play.
[2] For further information see the web site of the Committee on Climate Change (www.theccc.org.uk).