The first part of the plan - 'setting the scene' - provides a brief overview of the Neighbourhood Area as it is today, and some of the key changes that are likely to happen in future, as background for the policies that follow.

The planning policies themselves are the key statements that will be used in future to inform proposals for development and make decisions about them. The Neighbourhood Plan will form part of the statutory 'development plan' for the area that it covers, alongside the new North Hertfordshire Local Plan once it is adopted. The law requires decisions on planning applications to be made in line with the development plan unless other 'material considerations' indicate otherwise.

The planning policies are divided into three groups:

Each policy is supported by some text that explains the reasons for it. The policies apply to applications for reserved matters consent as well as planning permission, where relevant. 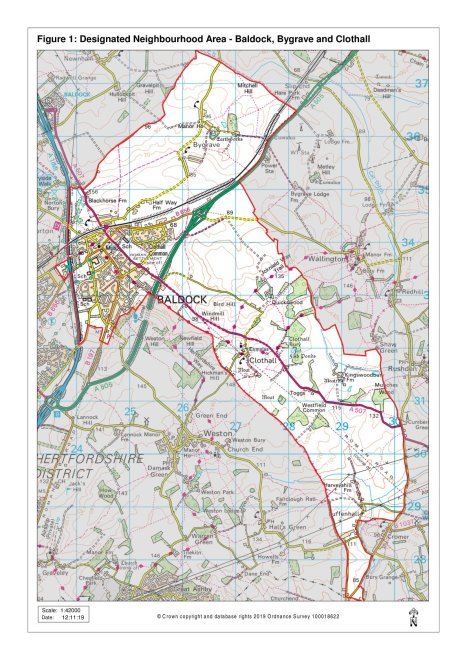 There are limits to what a neighbourhood plan can cover: its policies must relate to things that can be dealt with through the planning system, rather than other public services or commercial decisions. However, the process of producing the plan has inevitably identified some wider issues that the community would like to see considered. These are recorded in the evidence report that accompanies the plan, which has been brought to the attention of the District and County Councils.

[1] Once the new North Hertfordshire Local Plan is adopted. In the meantime, 'saved' policies from the District Local Plan No.2 With Alterations, dating from 1996, remain part of the development plan.