Annex A: How the plan was put together

The views of the local community were central to the decision to produce a neighbourhood plan, and have been a critical input during its preparation. They have shaped its core purpose - to get a better deal for Baldock, Bygrave and Clothall if the District and County Councils' proposals for growth go ahead - as well as the subjects that the Neighbourhood Plan focuses on.

The preparation of all neighbourhood plans needs to follow a number of steps, starting with early community discussions about local concerns and priorities. This took place in a number of ways - through open community meetings, street stalls during the annual Baldock Festival, community walks around the edges of Baldock, discussions with representatives of different organisations, project work by students at Knights Templar School and a community survey. Further details are contained in the Evidence Report submitted alongside the Neighbourhood Plan.

These discussions helped to identify the objectives that the plan should pursue and the types of policy that might be needed. However, two other things had to be studied before any policies could be written.

The first is the other evidence that exists about the area, and about the potential impacts of new development. A substantial amount of evidence has been produced for North Hertfordshire District Council to inform its new Local Plan, which was studied alongside other relevant technical reports (including those commissioned by Hertfordshire County Council to support its initial planning applications for development around Baldock). Where necessary site visits and the community survey carried out in January 2018 were used to fill gaps in the evidence available.

A SWOT analysis (strengths, weaknesses, opportunities, threats) could then be carried out for five areas that the neighbourhood plan was likely to focus on:

This analysis, and a list of the key documents reviewed in preparing the Neighbourhood Plan, are contained in the separate Evidence Report.

The other thing that was studied at an early stage was the new North Hertfordshire Local Plan itself, to assess the extent to which its proposed policies already address the issues raised by the community or highlighted by the evidence base. From this, a 'gap analysis' was produced of issues that might be addressed more fully through the Neighbourhood Plan. The results of this analysis are also summarised in the Evidence Report. Possible changes to the new North Hertfordshire Local Plan that have emerged during and after its examination have been kept under review, in case they have implications for the Neighbourhood Plan.

The early community discussions, and the reviews of the evidence base and the new North Hertfordshire Local Plan, allowed an initial set of policies to be drafted. These were discussed informally with other members of the Baldock, Bygrave and Clothall Planning Group, local councillors, officers and consultants working for North Hertfordshire District Council and Hertfordshire County Council, and relevant agencies such as Historic England. This initial feedback was taken into consideration in finalising the draft Neighbourhood Plan that was published for consultation.

Alongside this work, the Planning Group was successful in making a bid to the Government's support programme for neighbourhood planning, so that specialist help with design could be provided. How new development might look was one of the community concerns identified in the early discussions about producing the Neighbourhood Plan. Through the support programme, AECOM (a firm of professional consultants) worked with the Baldock, Bygrave and Clothall Planning Group and the wider community to prepare additional guidelines on design that could form part of the Neighbourhood Plan. Further information on how this was prepared is contained in the Design Guidelines that accompany the plan.

The draft Neighbourhood Plan, including the Design Guidelines, was consulted on in May and June 2019. In response to the comments received, a number of changes were made to the Neighbourhood Plan to refine its policies and the supporting justification. This included commissioning additional work from AECOM to assess the degree of separation which is needed between Lower Bygrave and Baldock to avoid the settlements appearing to coalesce and prevent landscape harm. Further details of the consultation process and how it has been taken into account are set out in the accompanying Evidence Report. 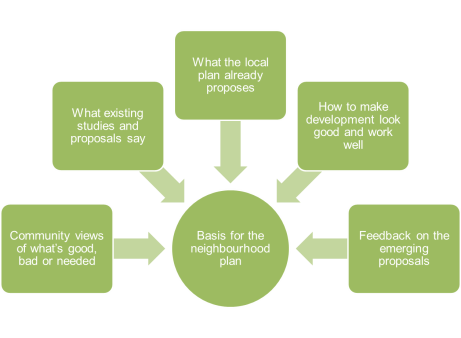 Before neighbourhood plans can come into force, it has to be shown that they meet a number of 'basic conditions' set out in law, as well as passing a local referendum. In broad terms, these basic conditions are that the plan:

Details of how the Neighbourhood Plan complies with these requirements are set out in a 'basic conditions statement' that is included in the accompanying Evidence Report. However, it is useful to summarise the key points here:

The preparation of the Neighbourhood Plan has taken into account the existing ('saved') Local Plan policies and those proposed in the new North Hertfordshire Local Plan, as well as those in the revised National Planning Policy Framework last updated in February 2019 (and its associated guidance). As the introduction to the Neighbourhood Plan explained, its purpose is to get the best outcome for Baldock, Bygrave and Clothall from whatever development comes forward following the adoption of the new North Hertfordshire Local Plan.

There are no habitats of international importance within the neighbourhood area (or outside the area which are likely to be affected by the proposals in this plan)[47]. Neighbourhood plans may require a 'strategic environmental assessment' under European and domestic law if they could have significant effects on the environment. This is a systematic process of considering the potential environmental effects of a plan, and in this country often forms part of a broader 'sustainability appraisal' that allows potential social and economic effects to be assessed at the same time (and which is required for all local plans).

However, to help demonstrate how it contributes to the achievement of sustainable development, a sustainability check of the emerging Neighbourhood Plan has been prepared, and this has been taken into account in refining the policies. The results of this check are set out in the separate Evidence Report.

[48] See the screening determination prepared by North Hertfordshire District Council, which is available on our web site www.bbplan.co.uk.